Day 10: Victoria, Dalston is the Centre of the Earth

Helen:  Last night of the tour and I feel a bit strange. I’m worried about Tunabunny, especially Scott and Brigette, cos they slept in the van and I know are exhausted. I really want tonight to be special and I want it to be Tunabunny’s night, too (I needn’t have worried about that!). It’s good to be back in London,  lots of people I really love have come to the show and I’m dead proud of the line-up we put together for this one. I’ve wanted to see Skinny Girl Diet for ages but kept missing their shows for various stupid reasons, so I figured one way to ensure this didn’t happen again was to invite them to come play a show I was playing myself.  When they turned up for soundcheck and I introduced myself I actually felt nervous. These girls rule. They look so fucking cool, and they sound urgent and soulful and angry AND during their set they play ‘Sunburn’, the achingly strange and beautiful song of theirs which I’ve been playing to anyone who will listen for months now.  Both Skinny Girl Diet and Ethical Debating Society floor us –  and everyone –  with their shows;  Tunabunny and Shrag members joining the rush to pick up t-shirts by both bands as soon as they finish.  It’s exciting. It genuinely feels like an honour to be playing on the same bill as these people. So then Shrag play and there are some predictable cock-ups, poor bob’s voice is croaky, the crowd are sweet and tolerant and receptive….and then Tunabunny come on and proceed to rip up the town. and the stage…as only Tunabunny can. And they really can.  Maybe we’ll see them again.

Bob: I wake up in my own bed like Judy Garland and wonder if it has all been some strange and wonderful dream. I call out for Toto and all I get is Shrag. We’re not as good as Toto, admittedly, but I still love this band.

Today feels like a day off. There’s a small matter of a soundcheck at 5pm but hey I’m home and the day is mine. Scott and Brigette slept in the tour bus last night. We didn’t make them do it. That would be unfair. No, they volunteered to do it like the troopers that they are. In fact by the time I woke up there was already an email in my inbox from the van hire place with a forensic crime scene photo of vehicle damage. Ouch. Sobering stuff, but this means that Scott and Brigette not only slept in a van, they loaded in all of our gear into the venue and drove the van back to the hire place while I was skipping down the yellow brick road.

For anyone about to rock you have to salute these people.

The Victoria in Dalston will never win any least stinky venue awards but it has a certain charm. Tonight’s show boasts an amazing lineup of grrrl punk bands with Skinny Girl Diet & Ethical Debating Society opening for us. I was horrified when I googled Skinny Girl Diet and was presented with a dieting blog as top search result. I shit you not: http://www.skinnygirldiet.org/. Hopefully this will soon change as the band are FUCKING AMAZING and deserve to be top of the singles charts, let alone google search rankings.

Our show is a bit scrappy, peppered with fuck ups and technical clangers, but we hold it together and my dry croak of a voice is just about audible. Like every good show, Russell and I end up on our backs while feedback and noise washes over us. I like playing shows. Always an excuse to have a nice lie down.

Tunabunny are phenomenal. They close their set with a truncated (a mere 10 minute?) version of Outer Space is the Centre of the Earth. They’ve been saving this one. They seem to be dismantling their equipment on stage. Sensible. Saves valuable time for load out. It’s incredible to behold and when the audience are definitely sure it’s over they give the band a standing ovation. Ok they are standing anyway, but if they were sitting down they’d definitely stand up at this point. 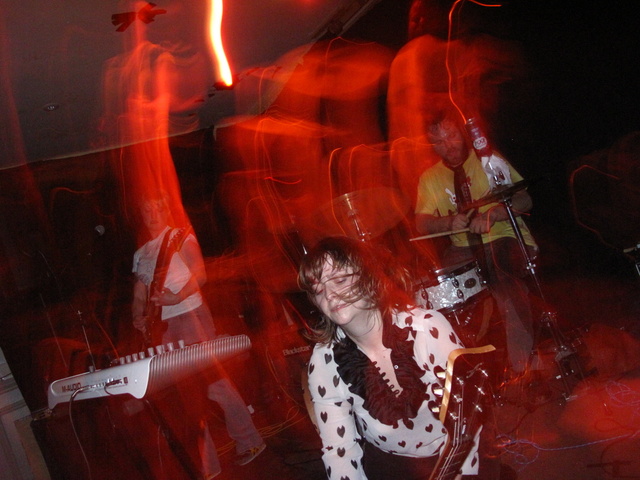 So that’s it. The tour ends here. We hug and wave and tentatively predict when we will start missing being on tour together. Tuesday seems to be the consensus.