Day 8: A Sight For Sore Eyes in Liverpool

Bob: I wake up and immediately have to leave John’s house because my phone refuses to connect to the outside world. Maybe sandstone is impervious to the 3 network? I don’t know but I stumble out and I’m not sure where I am because google maps looks blurry.

I see a charity shop the size of an aircraft hangar so I head inside while brain wakes up. There are several tonnes of vinyl boxes in here. This could take a while.

I decide to buy everyone a 7” single.

Steph: M People – Sight for Sore Eyes / Sugartown (1994). Never heard this but Steph seems to love Heather Smalls. (Steph: I kept trying to leave this record places but Bob always found it and gave it back to me ‘Steph, i think you forgot something!’)

Scott: Steve Wright and the Sisters of Soul – Get Some Therapy (1983). We accidentally tuned in to Steve Wright’s Radio 2 show and I blamed the man for the downfall of western civilisation. Which is a bit harsh, but still partly true.

Mike: Pratt & McClain – Happy Days/ Cruisin with the Fonz (1976) – I tried to convince Mike earlier in the tour that all British people nowadays use the expression “Sit on it”

Brigette: Fiction Factory – Feels Like Heaven / Everyone But You (1984). She got this confused with John Wayne is Big Leggy by Haysi Fantayzee. It is important she knows the difference.

Russell: Carter the Unstoppable Sex Machine – Rubbish / Rent (1990). Because he still loves them and will never admit it.

I catch up with the others. They have been staying on a floor belonging to a benevolent soul named Nadine. I buy her 2 Sleeper CDs by way of thanks and I’m not sure why. By the time I get to her address the bands are outside and ready to leave. I sheepishly tuck away the CDs. It’s either that or I bound up to her flat to present them to her. That now seems weird.

Talking of CDs we have now acquired 3 box sets on the tour. They have remarkably similar track listings. My contribution is a 3 disc Greatest Ever Rock compilation to add to the 8 CDs of punk and new wave cluttering the glove compartment. The fact that it ends with More Than Words hangs over it like the Sword of Damocles but along the way there are some entertaining headbangers like Ace of Spades,  More Than a Feeling and The Nice’s preposterous America. Mary Jane states that the last thing she expected on this tour was to be sitting in a car with Shrag listening to Freebird.

Liverpool is always a welcome destination. I’ve had consistently good times here over the years. The venue seems perfect too. Decent sized stage. Great veggie menu. It even has a dance studio upstairs but it seems to be occupied by men in towelled robes kicking each other so practicing our stage moves is not gonna happen today.

A good crowd starts to amass approaching show time. I unfortunately miss the Meow Meow set, but do get back in time for Town Bike who are always super fun and I find myself grinning throughout – a grin that gets even wider during their power punk makeover of Shoplifters of the World. Next up is a band called Shrag who redefine the word shambolic for tonights performance, but nobody seems to mind. There’s whooping and dancing. I’d say they were successfully warmed up for Tunabunny but then Helen will just turn to me and shout “dirty bastard” so I won’t. In fact I  find it hard to say anything at the moment. My voice has all but disappeared. I feel like that hilarious Rob Brydon character. Can’t remember his name. Something about a box.

After the show we all pile back to Gabby from Town Bike’s flat and Russell and I immediately decide we are gonna hit the town. Sarah Town Bike and co-promoter/fellow local legend Will are waiting for us at a pub somewhere or other. We manage to find a place that looks like a tiki bar and plays the Smiths alongside chart R’n’B. It seems like the greatest place on earth –  for a few hours at least. Here is a picture of Russell and Gabby throwing shapes: 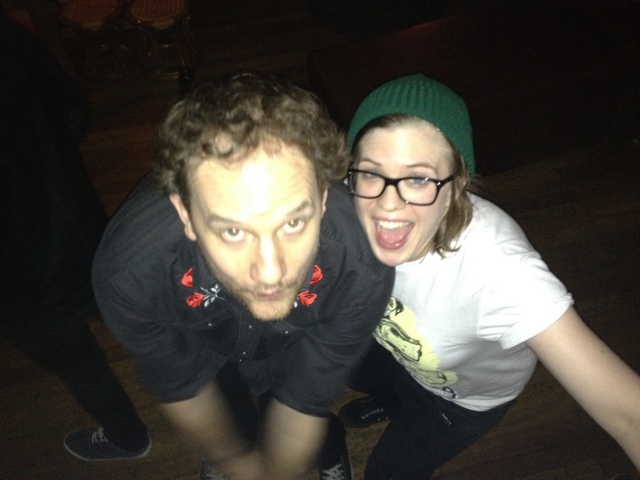 She’s on the throne: 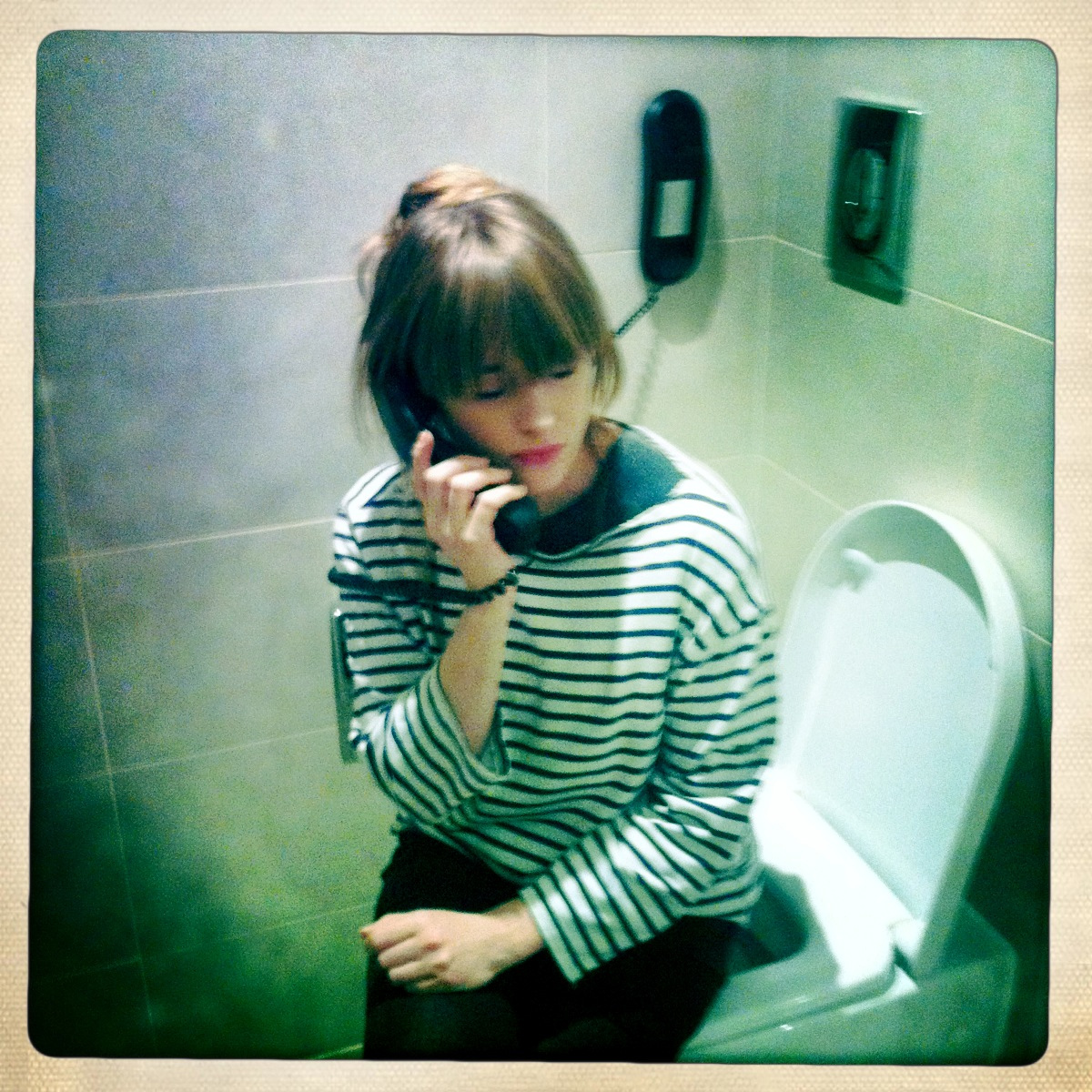 Helen: I know talking about food is boring but I get a vegan lasagne at the Liverpool venue  replete with fake cheese and everything. This makes me happy. I’m happier still to see Will (Fitzpatrick, the promoter for tonight) and the Town Bike guys; I’m a bit in awe of Sarah TB.  She once told me that if her band gets a bad review she writes personally to the reviewer meticulously yet politely challenging them on all the negative things they say about Town Bike and explaining why they are wrong; I think this is kinda great. The show was so much fun. I feel in love with everyone. Dirty bastard.  Our dear friend Colm from  Language of Flowers and Help Stamp Out Loneliness turns up and says that Steph and I can stay the night  in his swanky hotel that he got booked through work. Colm is The Manager Of The North For Waterstones. In the morning he has to leave early for work, so Steph and I amuse ourselves for a couple of hours with the hilarious tolietphone and then try to check out; unfortunately the hotel staff clearly think we are prostitutes, and say that the room hasn’t been paid for, so we substantiate their suspicions and humiliate ourselves for a bit by trying to pretend that we knew all about the booking details, before having to call Colm and then pass the phone over to the clerk. He talked sternly to her for a bit in his authoritative Irish Manager of the North brogue and we stood around trying to look indignant and not like prostitutes and she eventually let us go.